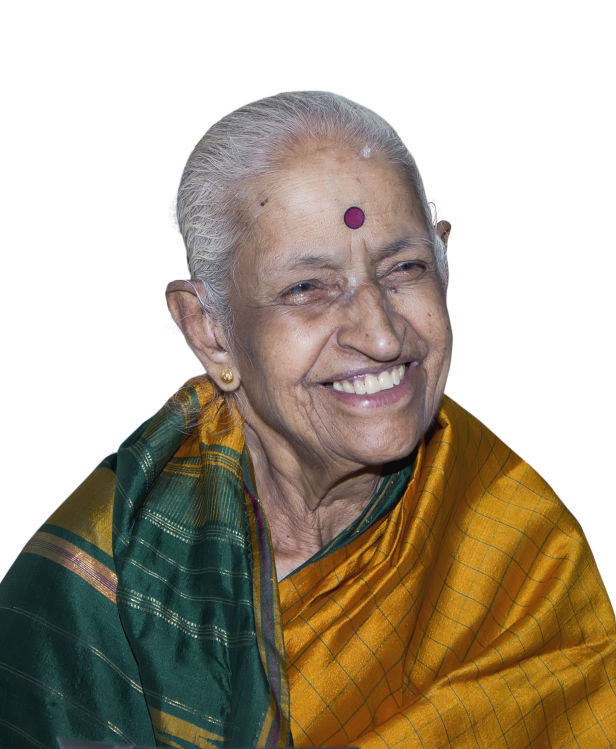 One in every five Indians, according to Government statistics, needs mental health counselling. What’s more, 6 per cent people need medications and 20 per cent need counselling. Overall 1 per cent of our population suffers from serious mental health disorders, while 5 to10 per cent suffer from moderate disorders. The other side of the picture is that majority of the victims do not have access to trained counsellors or a doctors for medication. Forget the rural areas, even in metro cities like Delhi and Mumbai the people continue to ignore the minor symptoms until they turn into a big trouble.

Setting a milestone, 80 year old MC Pankaja through Prasanna Counselling Centre, a project by Hindu Seva Pratisthana, Bengaluru, has turned around 2000 ‘laymen’ into trained counsellors, who successfully brought happiness on the distressed faces of over 4500 people in Karnataka.

The more the life is getting easier due to urbanisation and industrialisation, the more critical form the depression is assuming. Today, depression is the commonest form of mental illness across the world. In India, it is prevalent in 30.7 out of 1,000 people in metro cities. Moreover, neurotic depression, a mood disorder consisting of chronic depression with less severe but longer lasting symptoms, is prevalent in 22.8 people out of every 1,000, while psychotic depression, a more serious form that may require hospitalisation, is prevalent in 7.8 out of every 1,000 people. But instead of seeking medical advice, most people believe that mental disorders are the influence of evil spirits and they avoid visiting a doctor. This thinking has caused much harm. Fact is that mental disorders develop due to chemical reactions in the brain and are fully curable. What is needed is just the right approach and proper guidance to the victims and their family members.

Began 34 years back to help the persons in distress, Prasanna Counselling Centre has now turned into a trusted place for counselling in Karnataka to which even the psychiatrists from National Institute of Mental Health and Neuro Sciences (NIMHANS) and many leading psychiatrists of the city refer their patients for counselling or rehabilitation. Around 10 patients visit the Centre every day. The brain behind the project is octogenarian MC Pankaja, who motivated by the then RSS Prant Pracharak the late Ajit Kumar, started this new concept by introducing a training programme in counselling for ‘laymen’.

“Since, it was first of its kind experiment in the country by a social organisation, many questions confronted us right from the day one. The prime questions were whether the non-professional help should be provided to the people; can skills acquired over the years of training be transfered by a professional to non-professionals efficiently; will the quality of work not suffer, etc. But the solution was found. Since a priest, a grandmother, an uncle and friends all these people, since time immemorial, offered help to their beloved ones without any legal restraint, it was felt that the help by non-professionals need not be such a controversial issue and the project was started with full confidence,” points out Pankajakka, as MC Pankaja is popularly known.

The first training programme began on September 15, 1980 and the first batch of 16 persons was trained for three months. Twelve of those volunteers were given practical training through case presentation for one year. Since the trainee counsellors had very little opportunity to meet and counsel the clients, in their natural settings, it was realised that a counselling centre be set up to provide practical training to the trainees. Thus, the first counselling centre was inaugurated on December 19, 1981 by Dr GG Prabhu, Professor and Head of Department of Psychology, NIMHANS, at Dharmashree, Bangalore. Ajit Kumarji named it as Prasanna Counselling Centre saying “individuals coming to the Centre with prapannathe (distress) should go with prasannathe (happiness).

Since then the Centre has been serving the patients six days of the week. Right from the beginning the service is free for all. All the six days, there is at least one MD psychiatrist from NIMHANS and Victoria Hospital, Bangalore. “Our councellors try to find out whether it is a psychological, mental, social, domestic, marital and scholastic problem. Afterwards, we refer the patients to a specialist with brief history. We also keep a close watch over the treatment and recovery of the patient,” says Pankajakka who is a trained counsellor. The Centre helps individuals solve their problems themselves. Normally, 5 to 10 sittings are required to fully cure a patient.

Over the years, the Centre has earned the credibility and reputation that even the reputed institutions like NIMHANS and seven universities including the IGNOU, Bangalore University and many colleges send their trainees for internship. The Centre presently runs four projects—Prasanna Counselling Centre, Training Programme for Counsellors, Child Guidance Clinic and School Mental Health Programme for Teachers. Under the training programme for counsellors, the 41stbatch of 70 trainees is underway since January 2014.

The Child Guidance Clinic, started in 2004, works on Saturdays. A retired professor of NIMHANS, Prof Malvika Kapoor, and some other special educators look after the clinic. Children’s problems like hyper-activity, dyslexia, bedwetting, learning disabilities are dealt with at the Centre. This clinic too has treated over a thousand children so far. Normally, teachers are not always able to identify the problems of the children in schools. The Centre gives them training as to how to identify problems of children, manage them at the school level or refer them to a clinic. A branch of the Centre has now been started at Malleswaram.

With 33 years of hard work and commitment, the Centre has made a deep impact on the lives of people. The Family Counselling has attracted even the judges. Karnataka police regularly refer cases for family counselling. Now a legal cell has also been started to provide legal help to the needy patients. One more big step taken by the Centre is to eradicate the misconceptions prevailing in the society regarding patients with mental disorders, mental hospitals and mental health professionals.

A teacher for 31 years, a suicide prevention volunteer for 15 years working in a hospital, Pankajakka is now a very popular figure in Karnataka. People from all walks of life invite her and her team for conducting workshops. If in the city, she never misses visiting the Centre even for a single day. At present, she is 80, but she looks after the Centre with full vigour. She has been honoured by many organisations for her outstanding work in this field. To name a few awards, Kannada Rajyotsava Award, Gargi Award, Deshasnehi Award, Samaja Sevaki Award, Narirathna Award etc., Sumangali Sevashram is also going to felicitate her on March 8 for her outstanding contribution to the society. Pankajakka really deserves applause for this wonderful contribution.

Recent article published in The Better India About Pankaja Madam on Dec 8th 2016. 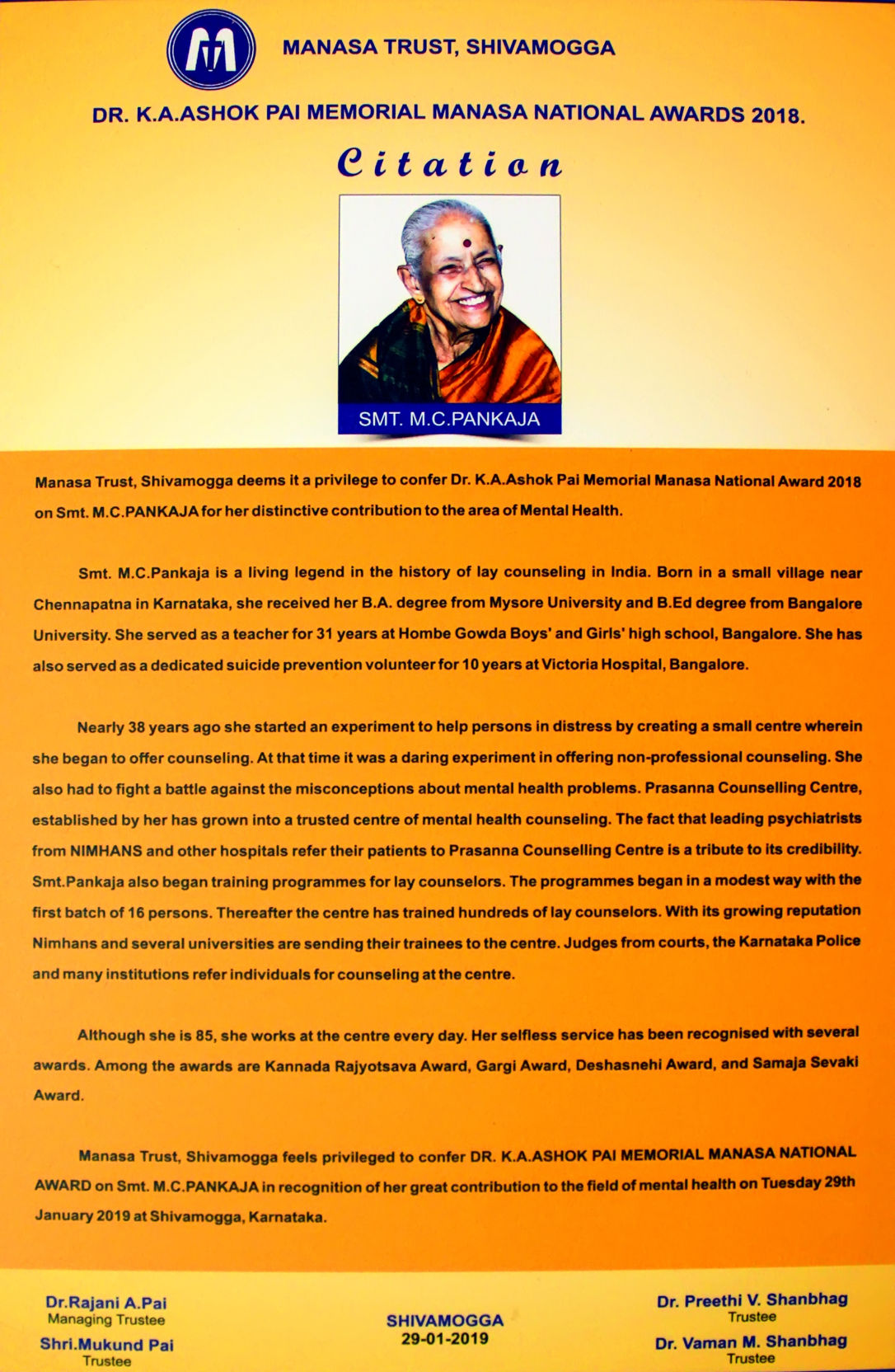 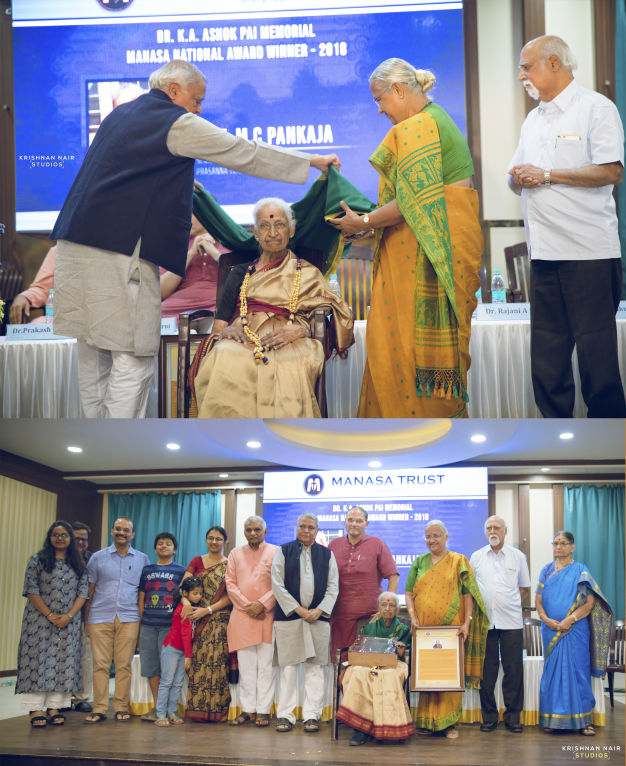 On 29th January 2019 Madam Pankaja has Been Awarded  Manasa National Award for the year 2018 by Manasa Trust in memory of  Dr .K.A.Ashok Pai, eminent psychiatrist and founder of Manasa Trust. Held at the auditorium in Government Employees  Association Building, Shivmoga.